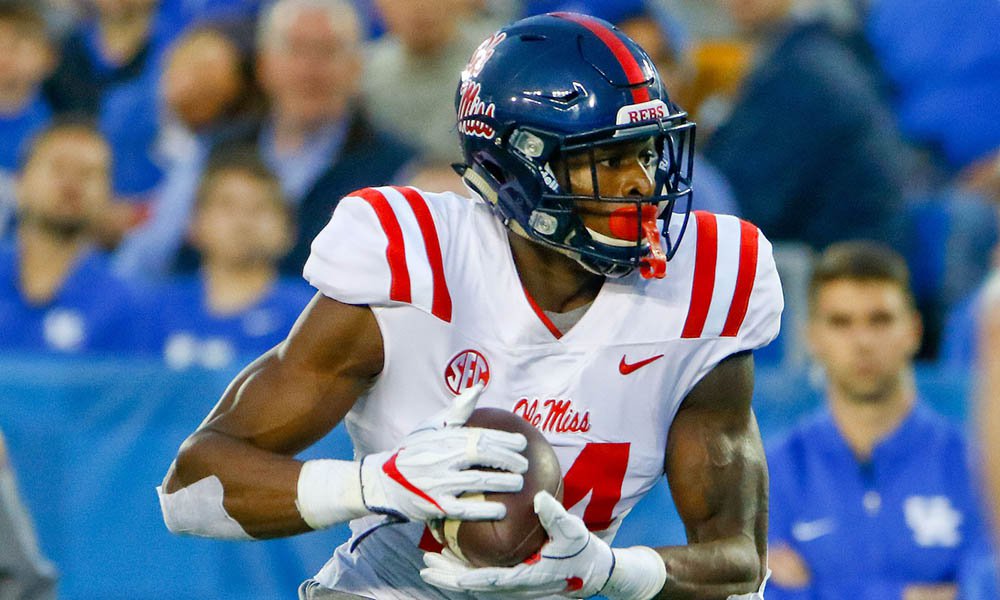 It is not often that a perfect prospect enters the Draft. Last year, Penn State and current New York Giants running back Saquon Barkley was that perfect prospect. A prospect where there are either very fixable flaws or no flaws at all. That no matter what team drafts him, he would be successful regardless.

At first, I was skeptical about whether or not Metcalf was a slam dunk pick. I wrote him off after hearing about his injury history and the limited route tree he ran at Ole Miss. It was always apparent that he had talent; I just looked for a reason not to draft him. Then his combine performance made me look at the gifted prospect with an open mind. He did not disappoint me.

After analyzing his game film and his combine performance, I can say with out a doubt, DK Metcalf will be a generational talent in the NFL for many years to come.

The knock on Metcalf, and his teammate AJ Brown is their limited route tree that they both ran at Ole Miss. Normally, I would be concerned if a wide receiver could only run one or two routes, but I fault this not on Metcalf and Brown, but instead I blame the Ole Miss coaching staff.

When watching game film, the two routes that Metcalf and Brown both primarily ran were either the curl or the go route. I would say that these routes were ran by them a good 75-80% of the time. After discovering this, I watched their combine drills and the few plays on film where they ran different routes in greater detail. Both prospects showed that they were not only able to run most of the routes on the route tree, but run them rather effectively.

My question here is why would Ole Miss limit their two NFL caliber receivers on their offense and not utilize both of their talents? Every year Ole Miss produces NFL caliber players, but yet still often find themselves as a middle of the pack SEC team because they hold their own players back.

So don’t fault Metcalf for the system he ran at Ole Miss. Instead, look closely at the plays where he didn’t run a curl or go route and see how effective he was.

In this play, Metcalf is at the bottom of the screen. He is able to create space by using his left foot as a jab step to break towards the middle of the field. The cornerback is playing press coverage on Metcalf and is unable to put contact on him to disrupt the route. Unfortunately for Metcalf, the Ole Miss quarterback sticks with his first read and fails to look over to Metcalf. This play would have resulted in a bigger gain, perhaps even a touchdown, if the ball is thrown to Metcalf. With the physical gifts that Metcalf has, it’s not like he needs that much separation in order to haul in a catch. The fact that Metcalf is able to create above average separation from opposing defenders is an encouraging indicator of his future success in the NFL.

Here is a similar play against Alabama. Metcalf is also at the bottom of the screen and uses that jab step again to create separation from the cornerback trying to cover him. Again, Metcalf was not the first read in this play and the pressure in the backfield forces the Ole Miss quarterback to run it and he misses Metcalf open again. Now granted, the window to throw this ball is much smaller than the previous play, but a quarterback with better pocket presence would be able to avoid the rushing defender and look over to Metcalf and pass it to him. Most quarterbacks at the NFL level are capable of making this pass and Metcalf would then be able to catch it in stride and make a big play.

Here is some Combine footage. Metcalf runs a simple in route and is able to slow down his forward momentum and make a strong cut towards the middle of the field. There is not much wasted motion in this cut and very few cornerbacks are going to be able to keep up with Metcalf in this route. Whatever drill you decide to analyze, Metcalf shows little difficulty in running the route that was asked of him. It frustrates me that Ole Miss limited Metcalf to basically two routes when he is clearly capable of running more.

Now for the fun part. In this play against Kentucky, Ole Miss is down by three points with 10 seconds remaining. Metcalf makes this catch with almost perfect coverage on him. He leaps over the defender, catches the ball, and manages to get one foot down in the corner of the end zone to win the game for the Rebels. This reminds me of a play DeAndre Hopkins would make and there are many more like it on Metcalf’s tape.

On this play against Alabama, Metcalf gets separation from the defender and is able to haul in a catch that was overthrown. He makes an impressive one handed catch in stride and turns on the jets for a touchdown on the first play of the game. Metcalf has the ability to make his quarterback look a lot better than he is by making catches like this one. This is where Metcalf made his living.

Yeah I said it. Metcalf checked into the combine at 6’3″ 230 pounds. Johnson is two inches taller than Metcalf, but these players are more alike than you would think. These players both share a unique height-speed combination that allow them to make some unreal plays. They both run 4.3 forty yard dashes and both have insane verticals to make catches over defenders. They both come from college offenses where their talent was under utilized (Johnson was limited by Georgia Tech’s option offense). It remains to be seen if Metcalf will have an NFL career as impactful as Megatron himself, but he has all of the physical tools to reach that level of success once he gets to the league.

As shown in the play above, Metcalf has the ability to reel in an overthrown ball and has the skill set to become an elite vertical threat if that’s how Buffalo chooses to use him. Metcalf would complement his new QB Josh Allen quite nicely due to Allen’s elite arm strength. Buffalo can wear a team down with LeSean McCoy and Frank Gore, then catch the opposing defense off guard by throwing it over the top to Metcalf. Plus having a receiver like Metcalf would help hide some of Allen’s accuracy problems and help his development tremendously.